Edmonton’s Mid-Autumn Festival has been going for several years now, but this year’s celebration of the event wasn’t only dampened by a series of unfortunate weather events; it was a reflection of the state of Chinatown’s history in Edmonton, and those across North America.

The event was supposed to have taken place at the Chinese Garden in Louise McKinney Park on September 15, but an early snowfall on the 12th delayed the event by a week and moved it to the streets of Old Chinatown. Continued cold weather forced organizers to move the new outdoor venue into the Edmonton Chinese Multicultural Centre last minute. 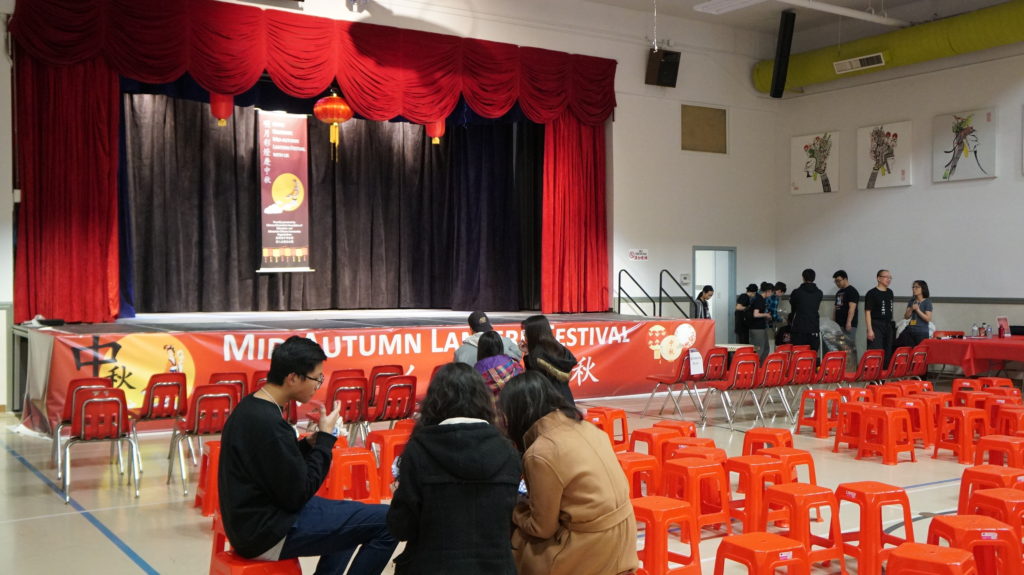 Between the date and two venue changes, as well as inconvenience from Valley Line construction, the confusion caused a lower turnout than past years.

Only a few community stands remained in the gym during the late afternoon. There were also noticeable gaps between performers. But thanks to the volunteers, the community room had several activities for children. Some of these activities included lantern making, Chinese yo-yo playing, and other kids games. 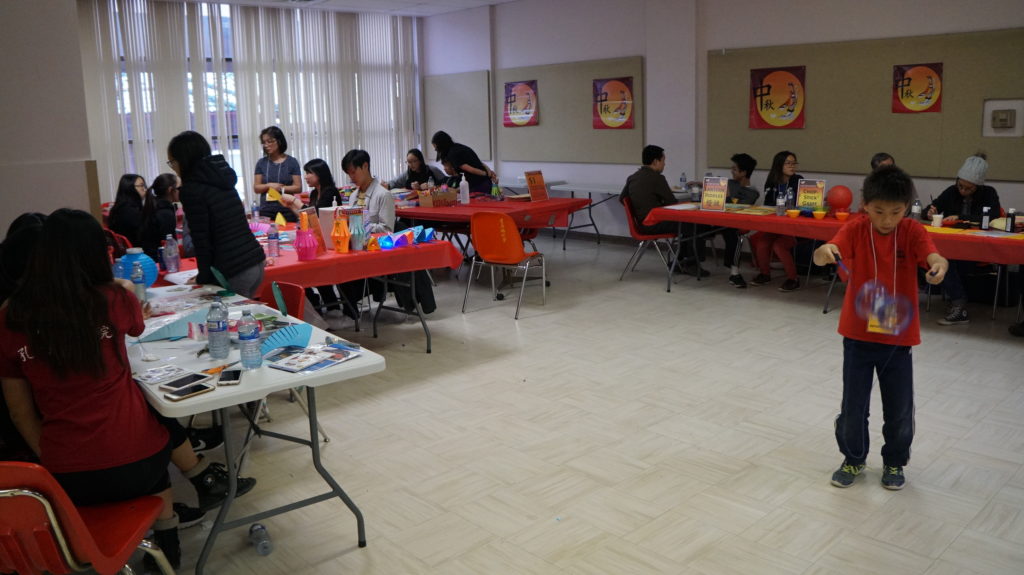 Although this event failed to attract the numbers from previous years, I found the venue quite refreshing. Growing up, I remembered hanging around at the Edmonton Chinese Cultural Centre, as it was an active centre with many Chinese learning programs. It not only brought back memories, but there was a glimpse of life returning back to this neglected area of Chinatown in Edmonton since its systematic relocation decades ago. The Chinese seniors, who otherwise would not be able to participate were it located elsewhere, were able to come down and celebrate with free mooncakes for their age cohort. 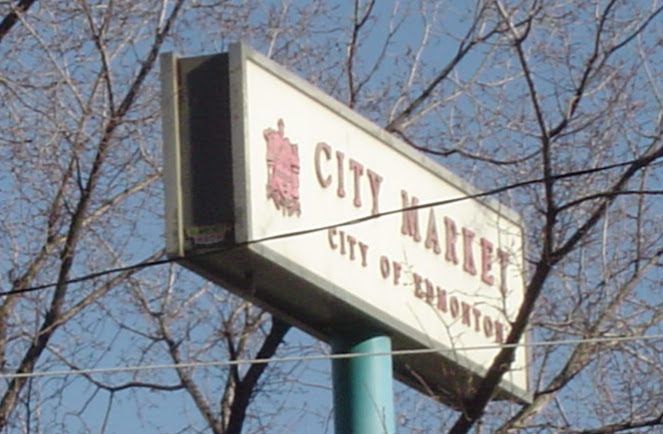 The City of Edmonton has been attempting to redevelop the area as The Quarters, and with it comes the ever threat of gentrification in one of the city’s oldest neighbourhoods. Before the 1980s, this area of Boyle-MacCauley was the heart of Edmonton’s Chinatown, with restaurants, businesses, Chinese familyÂ  and community associations, elders’ mansions, and even a shopping centre.

Our diverse Chinatown was moved in order to accommodate the building of Canada Place, a building in which the country it represents after prides itself on being a cultural mosaic. The move north along 97 Street allowed the Vietnamese with Chinese heritage to flourish, where more than half of the businesses and restaurants were of Vietnamese-Chinese background. The businesses which didn’t move to this new Chinatown suffered a long, slow death. Even Edmonton’s once-thriving City Market across the street from Canada Place was shut down for years to accomodate the development of a Gene Dub designed condo complex before its eventual move to City Hall and 104 Street.

Displacing businesses was the easy part, but for the non-profit associations and seniors residences, not so much. Since the Quarters were half residences and associations, and home to the remaining dying businesses, the entire area became unattractive to invest in. The buildings which weren’t demolished are still illegally run parking lots to this day, while the buildings which remain were boarded off, further lowering the profile of the neighbourhood.

To add to the problem, the unattractiveness of the neighbourhood slowly moved north as suburbia grew. The social issues of the day creeped up Church Street, and one by one, church memberships dwindled even in a car-centric city such as Edmonton. Several organizations, however, have since transformed the area. Where there once was a United Church and Central Baptist Church are now the Bissell Centre and the Mustard Seed. A few other churches have passed hands to remain churches, for the time being, while others have been repurposed for business use.

In their report, they found Chinatown consisted of Chinatown North (new Chinatown along 97 Street), and Chinatown South (old Chinatown along 102 Ave). The boundaries of this unified Chinatown meant that Edmonton had the largest singular Chinatown in North America, something Edmontonians should be proud of. Sadly, however, this city subcommittee did not see it as a strength. Instead, they recommended Chinatown be defined down to only a set of 3 blocks running immediately along 97 Street so that it may be marketed as a destination worth visiting.

The Chinese leaders, of course, was not happy with the redefinition, especially with old Chinatown completely removed. In fact, in the wake of Harbin Gate being moved, they wanted the gate relocated to the south end of 97 Street at Jasper Avenue where the original Chinatown was. The gate would then clearly define a unified Chinatown along 97 Street with the Gate of Happy Arrival on the northern end.

The Chinese community brought up their concerns with what was proposed to a City Council meeting. To my knowledge, talks have dissolved with this revitalization subcommittee. This City had also attempted to redefine Little Italy before this case, with no support from community leaders there either. Its only legacy was splitting the Chinatown-Little Italy Business Association into their own respective organizations.

So back to Old Chinatown and Mid-Autumn Festival this year, could more Chinese and community events bring life back to the area? It seems that like the days of the old radial railway streetcars and ETS trolleys, Old Chinatown cannot be resuscitated as it was. Like the Chinese businesses which died long ago, such as the mall where Furama Restaurant was (aka Mirama), it seems the Chinese seniors mansions and non-profit associations will one day simply be remodeled into the latest condos on the market once they pass on. The Valley Line construction and the dismantling of Harbin Gate earlier this year was the final nail in the coffin.

Seeing last weekend’s event on Facebook, I first saw the Gentrification Party as a tongue-in-cheek joke. It was one of the exhibits at this year’s Nuit Blanche Edmonton 2018. But after reflecting on the past weekend’s snowed-in Mid-Autumn Festival celebration, it seems gentrification has become a disease which has made its way across every Chinatown in North America.

The saddest part of the story of Edmonton’s Chinatown is that it’s not unique. I recently visited Detroit, Michigan, where no Chinatown exists. It was a shock to me. How can there be no Chinatown in such a big city, with bankruptcy issues aside? I later found that the city at one point had two Chinatowns in its history. They were lost due to ‘demographic changes’.

Portland is a step up. There is a preserved Chinatown Gate in the middle of its downtown. A handful of businesses remain if you walk around the block, but can that be called a ‘Chinatown’?

I also ended up in Ottawa’s Chinatown and tried to ask for directions to a nearby Hong Kong style cafe in both Cantonese and my broken Mandarin. It wasn’t until I asked ten different people that I found someone who spoke Chinese. The street was full of businesses, a bubble tea chain, and two Chinese restaurants that I saw. But the rest of the establishments were Korean, Vietnamese, Japanese, Thai, and other East Asian communities. I returned the next day to look for a dim sum restaurant only to find it in Little Italy.

In Ottawa’s case, Chinatown has become an International District, which Seattle is well known for. But an international district is a symptom of the problem of dying communities which, diasporas with different cultural backgrounds but same region of origin, end up having to come together to fend themselves against being wiped off the map.

Toronto isn’t immune either. While the Chinatown in Spadina is busy with a vibrant Chinese population, businesses have switched from Southern Chinese, to Northern Chinese ethnicities. The influx of Mainland Chinese immigrants in recent years, as well as tourists, have managed to kept it alive.

However, I found a lesser known East Chinatown in Toronto. The Chinese population has migrated to the suburbs and established shopping centres in places like Markham or Scarborough, while the barbecue shops, markets, and bakeries in East Chinatown are only subsisting because of the seniors who live in the area. This Chinatown will see the same fate as Edmonton’s Old Chinatown.

The loss of identity in Chinatown and the Chinese community can only be prevented if a number of variables happen, but the most important variable that needs to be stressed is that the community needs to reclaim its own identity. Whether it be educational programs, activism, social media, and supporting Chinese businesses and events, the only ones who can save Chinatown are the Chinese people who established them in the first place.

Without reclaiming Chinatown, whether it be the community being moved by the powers that be, socio-economic factors, suburban chains like T&T Supermarket, or young Chinese no longer living and associating themselves with the community, Chinatown will soon become a page in history books.

In Edmonton, our Chinese cultural celebrations are also being affected by the loss of identity. Recent years have seen celebrations move away from Chinatown and other places around the city. Chinese New Year events now happen at shopping centres, including West Edmonton Mall, Londonderry Mall, and Bonnie Doon Centre. While these events themselves are great, when you look closely at them, they’re all homogenous, no matter what Chinese celebration it is. There’s the staple Cantonese lion dance (yes, each region has a different type of lion dance), and the same martial arts demonstrations with the majority of performers not of Chinese descent, just to name a couple aspects.

At Edmonton’s Mid-Autumn Festival, the highlight of the event of candle boats isn’t even a Chinese tradition. I’m not saying it’s a completely bad thing either; it’s very Edmonton, just like our green onion cake.

As mentioned before, our Chinatown has a strong concentration of Vietnamese-Chinese, something unlike others across the continent. Our Made-In-Edmonton creativity have found ways to bring young people back to the area with Instagram walks, food crawls, and pop-up night markets. This bubble of uniqueness in the North American landscape may just be the thing to save Edmonton’s Chinatown.