How long does it take to take transit home? As the City of Edmonton’s latest #yegcommute campaign rolls into full force, it’s a question everyone has in the back of their minds.

Many avid transit users in other cities have time-scale maps and heat maps, and now we’ve got one for the Edmonton area, all based from the starting departure point of Central LRT Station. I’ve included these TWO representations below.

Since Edmonton isn’t as well connected as places like Hong Kong or London by rail services, these representations are modified for the fastest possible time taken by using our transit system. This includes both LRT and bus service from Edmonton Transit Service, Strathcona Transit, and St Albert Transit. Special routes to Edmonton International Airport, Beaumont, Fort Saskatchewan, Spruce Grove, and CFB Namao are also included. A special note is that industrial areas are exempt from the map.

Keep in mind that these are based on the fastest possible commutes based on perfect connections, on-time buses, and ideal conditions. The actually commute by transit will likely take longer due to connections and unforeseen circumstances, but this may be used as a point of reference.

The time scale representation puts the destinations from Central LRT station onto a linear commute easy to look at and compare against other commutes in the city. The branch from the LRT lines on the left, going to NAIT, Clareview, and Century Park, and connect onto feeder buses. On the right, the equivalent bus commutes are grouped mostly into South-, West-, and North-bound destinations, as most Eastbound destinations use the Southbound departure from the 100 Street bus station. 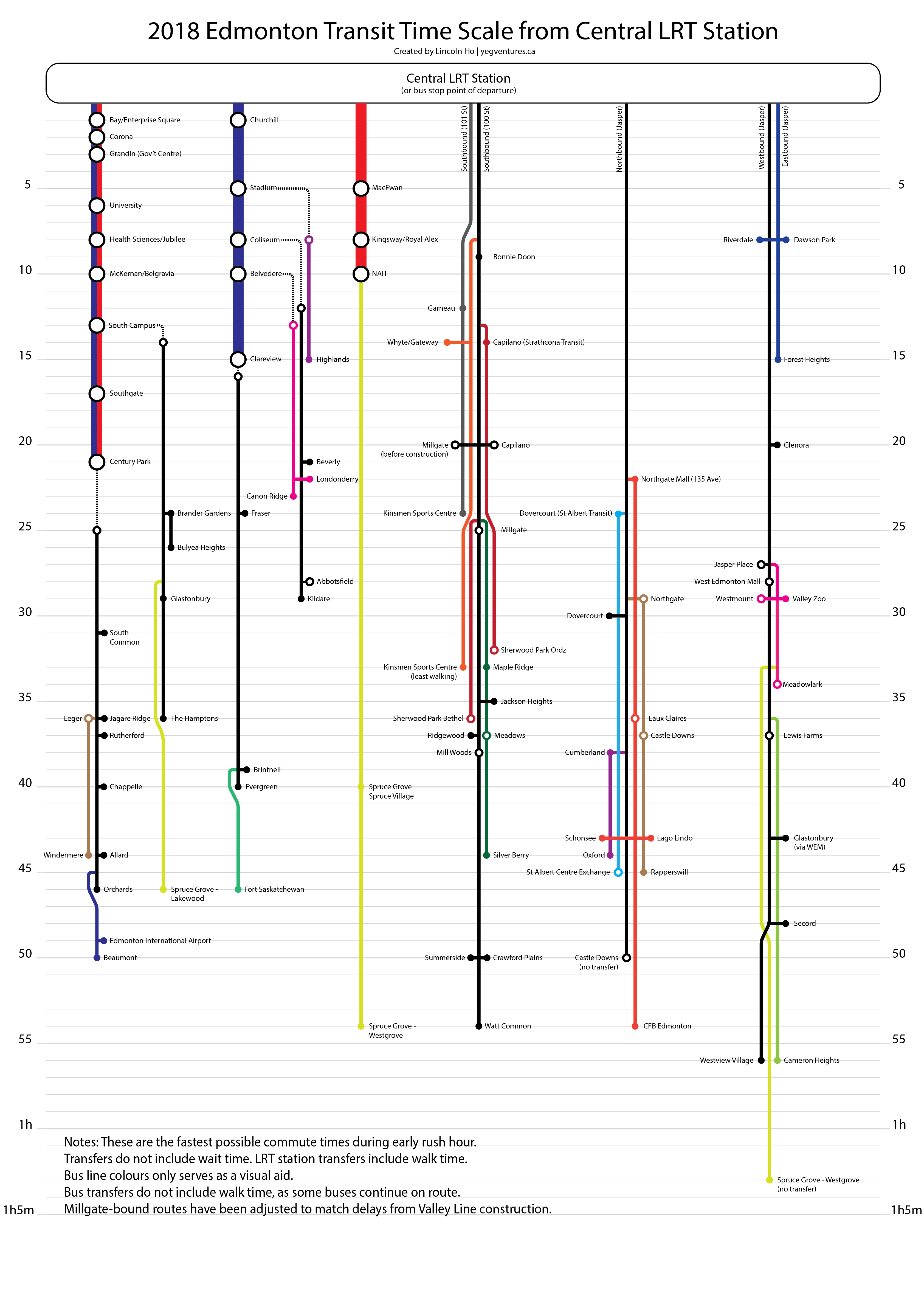 The heat map representation groups times into 10 minute intervals. It’s no surprise that in general, the further you go from Central LRT station, the longer it takes. More neighbourhoods will be added over the next couple weeks to complete all neighbourhoods with residences.

Anomalies and Commutes of Interest

Kinsmen Rec Centre is the least transit-accessible destination in Central Edmonton. A commuter would need to take the 9 across a congested High Level Bridge, hop off, cross the road and wait for a connection to arrive within 20-29 minutes, OR take the route with a no-walk transfer by taking the 7 to Old Strathcona, and hopping onto a connection at the same stop which would arrive within the 30-39 minute range.

Mill Woods is a mega community, and few would realize how big it really is by transit scale until you take a look at its commute time. Depending on where you live in Mill Woods, your transit journey could finish within 20 minutes, or nearly 1 hour.

Maple is the most populated neighbourhood not served by Edmonton Transit. It is a 3 minute drive from The Meadows Transit Centre, yet for some reason or another, it has been neglected unlike its developmental residential cohorts such as Chappelle or the Orchards.

Sherwood Park is the best bedroom community to live in if you wish to live outside the City. By both transit terminals, the journey falls within the 30-39 minute range. With their comfortable long-haul coaches and double-decker buses, it’s no wonder Strathcona Transit often wins the best transit service in Canada for its category.

Cameron Heights is the worst place to live in by pretty much all modes of transport. The fastest transit commute to the neighbourhood is 56 minutes. Coworkers in Beaumont, Fort Saskatchewan, or those who are headed to jet off at Edmonton International Airport will all arrive at their destinations before you reach your home in Cameron Heights.

Despite its location in West Edmonton, it’s faster to get to Glastonbury and The Hamptons via South Campus interchange than it is by way of the 100 Super Express to West Edmonton Mall.

The Metro line is actually useful for those living in Spruce Grove. If you live in Spruce Village or Westgrove, the NAIT connection is best. While a Spruce Grove connection at South Campus will get you to the Lakewood area in a little as 46 minutes.

If you live in places such as Dovercourt or Capilano, consider intercity bus services like St Albert (24 min to Dovercourt) or Strathcona Transit (14 min to Capilano) as it may take you there faster than ETS (30 min to Dovercourt, 20 to Capilano). Traveling within the city on those services will not cost any extra with an ETS bus pass.

What can we learn from these transit commutes?

Despite Edmonton’s love-hate relationship with the LRT, all destinations along the line are well served to be the fastest journeys. Communities feeding from the LRT line benefit greatly. For example, it takes 15 minutes to journey 8.5km from Central to Clareview station. The same distance of 8.5km from Central to Jackson Heights takes 35 minutes – 20 minutes more. All destinations feeding from Clareview (except Evergreen and Fort Saskatchewan) will still have a shorter commute time than those taking the bus to Jackson Heights.

And that brings into consideration another point – all available modes of transport work together. The more modes of public transport available in a city, the better the commute is for its citizens. The Valley Line LRT should in fact, be promoted as a whole separate mode of transport – tram – as it is in every major city on the planet with multiple rail services. It adds to the transportation profile of the city, and makes it a legitimate mode of transport worth investing in, as it doesn’t exist to compete against a subway service, but complement it.

Also to note is that buses may also arrive sooner than scheduled as well. During the pre-Valley Line construction, it was possible to get to Mill Woods sooner than scheduled during rush hour. I have had the real life pleasure of getting to Mill Woods Transit Centre in a short of a time as 24 minutes, and home to Ridgewood in only 28 min! This is why I’ve always raved about the amazing bus service in Mill Woods (pre-Valley Line construction).

Mill Woods is serviced by great express routes and has been projected to not cutting travel if a BRT was built. The mega community will benefit with the completion of the Valley Line Tram. Although the results will not be immediate, over the span of a decade, the comparison against either the North and the West commutes will be significant, even with the current 100 Super Express.

Parts of Edmonton would benefit from a revamp or bus-only lanes through neighbourhoods. A bus trap with a multiuse-bus bridge connecting Riverbend with Cameron Heights would cut the transit commute by 20 minutes. If the city wants to invest in a solar energy farm in their neck of the woods, this much needed transit oriented infrastructure would certainly ease the development of the energy park for the NIMBY residents of Cameron Heights, while at the same time encourage transit and bike use.

In the strange case of Kinsmen Rec Centre, the city lost a huge opportunity of servicing it from Downtown by not adding in a Southbound lane on the new Walterdale Bridge. The Rec Centre is often used for international sporting competitions and serviced by charter buses, which are at the mercy of the traffic on High Level Bridge. Future projects must take into account of the ease of transit connections, even if it means bus traps and bus lane access.

The Great Sand Hills of Saskatchewan

Festival of Trees at 31